Board of Directors Elections 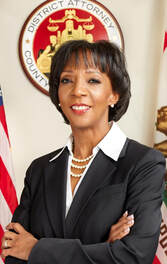 ​District Attorney Jackie Lacey has spent most of her professional life as a prosecutor, manager and executive in the Los Angeles County District Attorney’s Office. In 2012, she was sworn in as the 42nd District Attorney. She is the first woman and first African-American to serve as Los Angeles County District Attorney since the office was established in 1850. She is committed to safeguarding our children from human sex traffickers, our seniors from financial elder abuse and our communities from environmental crimes that threaten our health and our livelihood. District Attorney Lacey established the Conviction Review Unit to assess claims of actual innocence based on newly discovered evidence. She also appointed the office’s first Professional Responsibility Advisor. As chair of the Criminal Justice Mental Health Project for Los Angeles County, she leads a multidisciplinary working group devoted to diverting people who are mentally ill out of the criminal justice system for nonviolent offenses. She
initiated an ambitious plan within her office to provide free training to first responders on how to safely de-escalate incidents involving people in a mental health crisis. A Los Angeles native and graduate of the University of Southern California Law School, she leads the largest local prosecutorial office in the nation. 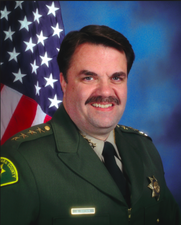 ​Bill Brown has served as Santa Barbara County’s Sheriff-Coroner for the past 12 years. He was first elected on November 7, 2006, re-elected to a second term in June, 2010, re-elected to a third term in
June, 2014, and re-elected again to a fourth term in June, 2018.
Sheriff Brown began his law enforcement career in 1977 with the Pacifica Police Department in the San Francisco Bay area. In 1980, he transferred to the Inglewood Police Department. He served that Los Angeles County community until 1992, when he was selected as chief of police for the City of Moscow in Idaho. In that position, he was responsible for overseeing police operations for both the City of Moscow and the Universi- ty of Idaho. In 1995, Brown was selected as chief of police for the City of Lompoc, being only the eighth person to hold the title of police chief in that community since it incorporated in 1899. He led the Lompoc Police Department for the next 11 years until being elected to his present office.
Sheriff Brown received his master’s degree in public administration from the University of Southern California in 1995. He was president of the 91st Class of the Delinquency Control Institute, and is a graduate of the Northwest Command College, the 169th Session of the FBI National Academy, and the 33rd Session of the FBI National Executive Institute. Sheriff Brown is a past president of the California State Sheriffs’ Association and a past president of the California Police Chiefs’ Association; as such, he is the only person to have ever held both positions. Since 2010 he has served as a Commissioner on the Mental Health Services Oversight and Accountability Commission for the State of California, and he leads Santa Barbara County’s version of “Stepping Up,” a National Initiative to Reduce the Number of Mentally Ill People in Jails. Sheriff Brown currently is Chairman of the Santa Barbara County Law Enforcement Chiefs (C.L.E.C.), and Executive Director of the Santa Barbara Regional Criminal Apprehension Team (S.B.R.C.A.T.).
Sheriff Brown and his wife, Donna, have been happily married for more than 38 years and have three grown children.

Substance Use and Offenders: From High to Homicidal

Statements: FMHAC is approved by the California Psychological Association to provide continuing professional education for psychologists. FMHAC maintains responsibility for this program and its content. Provider #FOR005. Course meets the qualifications for 13.5 hours of continuing education credit for MFTs, LPCCs, LEPs, and LCSWs as required by the California Board of Behavioral Sciences through the California Psychological Association. State Bar of California MCLE Provider #15388. Most presentations approved for POST.  Approval number 2540-28003-18002.

Registration cancellation requests must be submitted in writing to morgan@fmhac.net.